The law firm of Goldstein and Bashner in conjunction with The Long Island Coalition Against Bullying (LICAB) has offered announced the winners of the Annual “Anti-Bullying” essay scholarship. Stay tuned for details on the 2019 scholarship and how to apply.

Terrance Cameron, the 2017 winner of the Anti Bullying Honor Scholarship, is a senior at Oyster Bay High School and founder of Friday Friends, a service that once a month pairs special needs kids with volunteers to do something fun and provide the student’s parents with a night off. Since it’s founding, Friday’s Friends has now grown to two locations with over 140 participants.

In addition to his role with Friday Friends, Terrance is also the varsity captain of the cross country, winter track, and lacrosse teams and Vice President of the student council. We commend Terrance for all the work he’s done already to combat bullying in the community and we are excited to see what the future holds for Friday’s Friends. Watch Terrance’s acceptance of the award below: 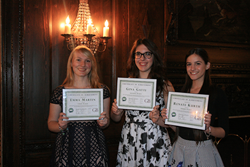 The law firm of Goldstein and Bashner and The Long Island Coalition Against Bullying (LICAB) announced the winners of the First Annual “Anti-Bullying” essay scholarship on May 16, 2016 at a celebration held at The Woodside Club in Muttontown, NY, as part of LICAB’s Third Annual Golf Outing. The anti- bullying scholarship was open to all high school students in Long Island. Students were asked to submit an original essay that answered the following question:

“As a long Island student, how have you helped prevent or stop bullying? This can be on a broad scale, like volunteering or being part of a club, or how you have helped a specific student who was being bullied.”

“We have talked to numerous parents on Long Island about things they can do to help their child if they are being bullied. Bullying and cyber-bullying has become a part of many young people’s lives affecting 70% of teens,” said Neal Goldstein, Partner of Goldstein and Bashner. “The Long Island anti-bullying scholarship encourages young people to not only stand up for each other but to consider their personal role in creating a bully-free environment.” “These students are on the front lines in the fight against bullying and reading these essay submissions gave us great hope knowing the various ways kids are tackling the issue head on and not accepting it as a reality that should continue” said Joe Salamone, Founder & Executive Director of The Long Island Coalition Against Bullying.

A total of 36 essays were submitted from Long Island high school students. Three finalists were honored at the event and received scholarships, as follows:

About The Long Island Coalition Against Bullying
The Long Island Coalition Against Bullying is a 501(c)(3) not for profit organization dedicated to emphasizing the importance of bully free communities on Long Island through education, increased awareness and therapeutic outlets. The organization seeks to turn the tide against bullying on Long Island by working directly with the community, victims and their families through various outreach, advocacy and personal development programs. For more information, please visit http://www.LICAB.org.